In many schools, there is "something in the air"...

... that has been confirmed by scientific studies, in addition to the PISA study, which show that the air quality in many classrooms leaves much to be desired. The culprit is high carbon dioxide (CO2) content in the air.

In recent years, the facades, including windows, have been renovated in many public buildings to save energy in the future. In Germany, many schools were modernised in the framework of the economic stimulus package II. The lack of natural ventilation was often not considered with the increasingly denser building shells. The result is a rising CO2 content causing fatigue, headaches and poor concentration among students as well as higher stress for teachers from non-receptive students.

In most school rooms, a change of air only occurs by allowing air to enter through windows, but only if the windows are open. If the windows are closed, the CO2 content increases rapidly. Frequently,CO2 concentrations in the ambient air are reached which are "not hygienically acceptable".

Already at CO2 concentrations of  > 1,000 ppm, the term "hygienically questionable value" is used. This is, however, already exceeded after a very short time; as soon as people enter the area. Even hygienically unacceptable values of over 2,000 ppm are not uncommon. A high external noise level, very cold temperatures and draughts make window ventilation difficult. This problem is exacerbated by the fact with that this type of ventilation, valuable heating energy escapes from the room and this must be laboriously heated again after airing.

Mechanical ventilation as a solution... 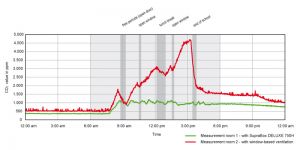 Mechanical ventilation of classrooms can help eliminate the problems mentioned. This was confirmed by a study done by a university in Denmark which was conducted in Danish schools. They came to the conclusion that students work more efficiently and more concentrated - by up to 16% more - in mechanically ventilated rooms as compared with rooms which are ventilated exclusively by opening the window. CO2 content in the classroom can only be kept at hygienically acceptable limits long-term in compliance with the comfort conditions (no cold draughts, draughty conditions, etc.) with mechanical ventilation.

Rosenberg provides the optimal solution for mechanical ventilation in class and seminar rooms as well as in office and meeting rooms with its SupraBox DELUXE series decentralised energy recovery units:

Do you have questions or suggestions?

We use cookies on our website. Some of them are essential for the operation of the site, while others help us to improve this site and the user experience (tracking cookies). You can decide for yourself whether you want to allow cookies or not. Please note that if you reject them, you may not be able to use all the functionalities of the site.